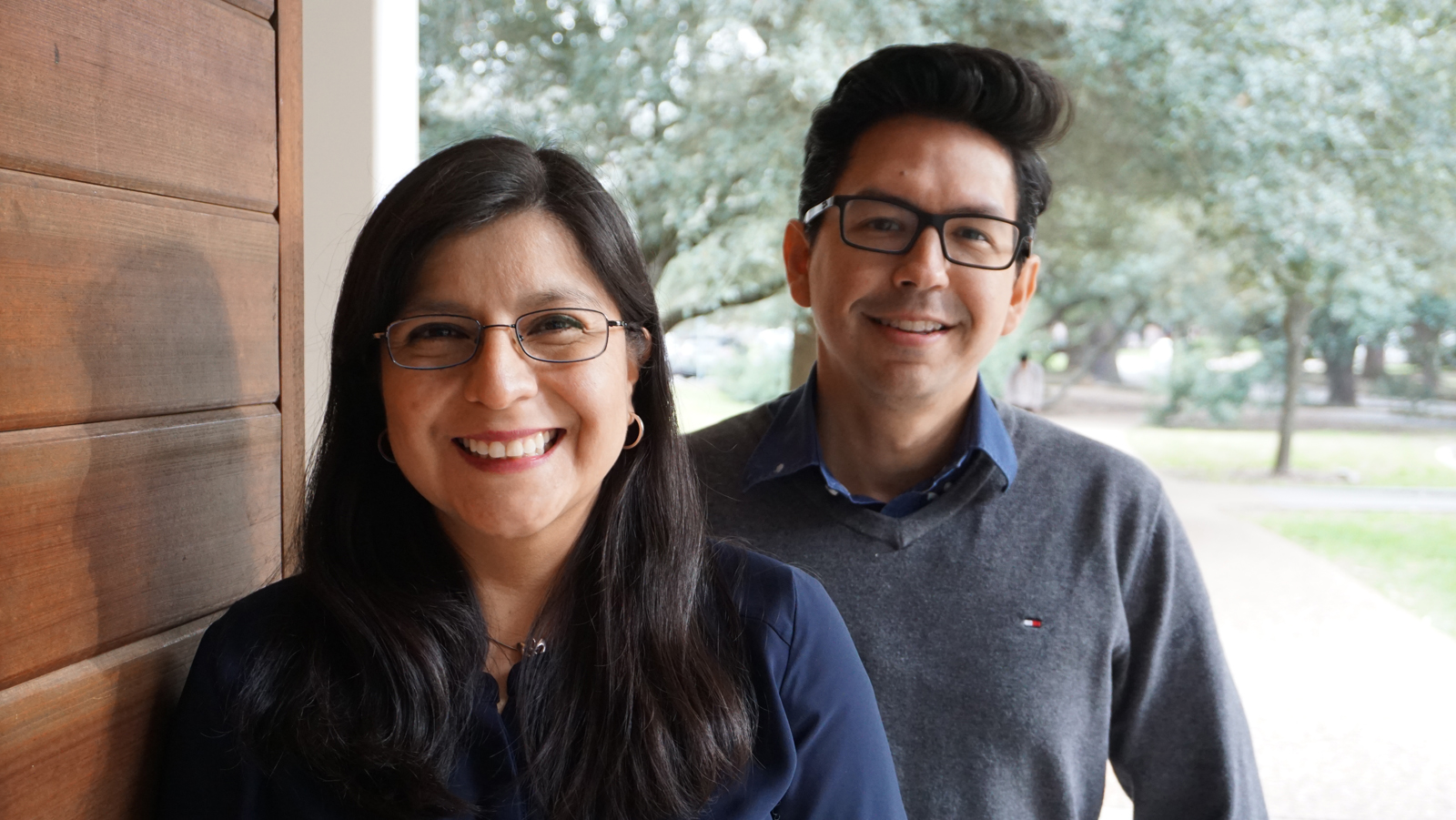 “Working with students online in our classes and programs during the pandemic, I could tell how hungry they are and how much capacity they have for learning and research,” said Tilsa Oré Mónago, who holds joint Rice University appointments as a lecturer in both the Master of Data Science and the Master of Energy Economics programs.

She is speaking not of the Rice students she now teaches, but of the students she met as a faculty member and director of an undergraduate Economics program at Universidad de Piura (UDEP) in Peru. The university’s primary campus is in Piura, with a second campus in the capital city.

“Beyond Lima, there is a significant lack of opportunity for students in Peru. I kept thinking about the Piura students even after I joined Rice. Last summer, I was talking with Vicente Ordóñez Román about how to expand knowledge about STEM career opportunities to students in underserved areas, and he told me about some different initiatives designed to accomplish that very thing,” she said.

Ordóñez Román, an associate professor of Computer Science at Rice, is from Ecuador. Like Oré Mónago, he was familiar with the challenges faced by universities outside the major cities.

“It is easy to take access for granted in the United States,” he said. “Ecuador has only two international airports. Yes, we have many cities, but most of the opportunities for research, collaboration, and professional careers are centered around the big metropolitan areas.

“When Tilsa mentioned wanting to increase awareness about working and researching in STEM-related industries, I pointed her to programs like Google’s exploreCSR. The exploreCSR awards support workshops to help introduce the idea of pursuing computing research to students who might not have considered it previously, particularly students in historically underserved or marginalized communities. We realized we could lower at least one of the access barriers for students in Ecuador and Peru by organizing a program that was conducted completely in Spanish.”

After successfully developing a proposal and securing an exploreCSR award, Ordóñez Román and Oré Mónago reached out to some of their Spanish-speaking colleagues around the world and to faculty members in three different universities in Peru and Ecuador. The Spanish language computer and data science research awareness program would last three weeks, beginning with online lectures and discussions and culminating in a two-day in-person workshop held at UDEP in Piura.

Ordóñez Román said, “The name of our program — Taller Regional sobre Aplicaciones e Investigación en Ciencia de Datos (TaReCDa) — makes sense and sounds quite nice in Spanish. In English, it translates to ‘regional workshop on applications and research in data science - ReWARDS.’ Twelve guest speakers and thirty one students participated. All the students were able to attend the in-person events at UDEP in Piura, Peru, thanks to the funding we received from Google.”

Nine UDEP students attended, plus 10 from Universidad Técnica de Machala (UTMACH) in Ecuador and 12 from Universidad Nacional del Centro del Perú (UNCP) in Huancayo. Their homework leading up to the in-person event was to prepare research idea pitches to give to their peers and the guest speakers. During the in-person workshop, students also benefit from a panel discussion about graduate school.

“We wanted to motivate them to consider problems they would like to research and then give them techniques and tools to pursue that research. Even the presentations were learning opportunities; after the question-and-answer part of each pitch, the students could receive feedback and presentation tips from the experts in the room,” said Oré Mónago.

“And oh! We had Peruvians from the north talking with highlanders from central Peru and students from the south of Ecuador. They began realizing that although their situations might differ, they faced similar problems that could be solved through research. They learned they could work together and figure out how to go about solving their challenges together, or maybe just bounce ideas off someone working on a different problem.”

Guest speakers and panelists included professors, research scientists, and entrepreneurs from Brazil, Ecuador, Peru, Singapore, and the United States. They introduced the students to concepts in their areas of expertise during the program’s first ten hours of online mini courses.

Oré Mónago said, “We dove into innovation, data analytics, machine learning, data science for construction and engineering, and data visualization — all areas where we need more people contributing their knowledge, ideas, and analysis. Additionally, we had discussions about the economics of renewable energy — an area where computing and data science research can have a great social and economic impact."

“We also found a partner in Tanqay, a non-profit mentoring group that wants to help underrepresented students better understand how to improve their career prospects through communication and presentation skills, resumes, job applications and helping them learn about labor markets, understanding the marketplace, and discerning what their peers and supervisors will expect of new employees. Interestingly, ‘Tanqay’ is based on a Quechua word that could be interpreted in English as “to push” — because the founders wanted to give a little career boost to the next generation of professional employees.”

In addition to the Tanqay mentors and professors from the three participating universities, guest speakers included Ruben Villegas, a research scientist with Google Brain, Nils Murrugarra-Llerena, assistant professor of Computer Science at Weber State University in Utah, and Matias Quintana, a data science research fellow at the National University of Singapore. Jorge Poco is an associate professor of applied mathematics at Fundação Getúlio Vargas Rio de Janeiro and Leissi Castañeda is a research director with BIOOArtificial Intelligence in Sao Paulo. To some of the student participants, the speakers’ breadth of expertise and career trajectories were surpassed by their local roots.

“I was surprised that all the TaReCDA speakers were from Ecuador and Perú. I knew they were from Latin America by their names, but I never imagined that they were from our countries. That changed my way of seeing the science. I discovered that a scientist is not necessarily someone from a developed country, and that pursuing science is not as difficult as I thought. TaReCDA changed my perspective and pushed me to seek opportunities to do what I like — especially in places where someone else needs what I know,” said Paulo Aguilar, a senior Information Technology engineering student at UTMACH in Machala, Ecuador.

Rodrigo Sanchez Bautista, a senior Industrial and Systems Engineer student at the Lima campus of Universidad de Piura in Peru, agreed. He said, “I was amazed that such important organizations like Google and Rice University were organizing a series of free online classes about data science. Besides the classes, we would be able to interact in-person with experts in the field who also share a Latino background. It was an opportunity I couldn't miss, and I was very eager to participate.

“The impact comes from now knowing there are many opportunities in this field and that there are people willing to do great things to help others improve their careers and lives overall. After all I’ve learned, I’m pretty sure that at some point in my career, I could work in the tech field — whether it is in data science or fintech.”

Some of the students learned about the program through their professors or their university’s career centers. Cristian Torres, a junior systems engineering student at UNCP in Huancayo, Peru, got the message from a friend.

“I’d never gone to one of these kinds of events and I really wanted to know more because I enjoy learning new things. For me, the most important aspect was the knowledge and tools the panelists shared with us about things I didn’t even know existed. They gave me a new perspective [of research tools and opportunities] which I’ll probably decide to follow in one of those ways,” he said.

Diego Uriol — a senior industrial and systems engineering student at UDEP in Piura — said he was able to “interact with peers from other universities as well as the invited panelists, in addition to learning about the various data science projects they were working on. After attending TaReCDA, I plan to focus my career on data science or a related field.”

One of those peers, Willy Carreño, was happy with the opportunity to establish professional contacts in the computer science industry. The senior information technology student at UTMACH in Machala, Ecuador said, “I got involved in projects with high impact in Latin America. The most important thing for me was hearing about the experiences of the international speakers who were working abroad. Everything about this workshop will allow me to improve my hard and soft skills and apply them to local jobs which use deep learning as their main focus.”

The students’ excitement is contagious. Ordóñez-Román, whose research interests lie at the intersection of computer vision, natural language processing and machine learning, is already considering ways to leverage the workshop’s synergy.

He said, “Our histories — Tilsa’s and mine — and Google’s interest in expanding computing research in areas like our home communities helped bring us all together. Meeting students in these communities, talking with them in their native language about the tools of today, really helped expose them to fields like data science. But it also began connecting them with each other.

“Overall, we’re helping to build and expand computing research communities in areas that may not have known how to connect with their peers in similar universities. Beyond this initial event, we want to continue building relationships with these researchers — long-term relationships and not just with the United States’ partners but between Ecuador and Peru and within those countries as well.”

He said his efforts to make more people aware of the need and opportunities in computing research benefits Rice, which is a global university, and it also benefits Ordóñez-Román’s own research group.

“I’ve been lucky to have so many opportunities at Rice, and I’ve found a way of contributing back from here. Students from all parts of the world are studying here, in the type of environment that you can only realize at Rice. In my current lab, I have someone from Costa Rica, someone from China, and someone from Ecuador — my first Ph.D. student from Ecuador!” said Ordóñez-Román.

“Workshops like TaReCDA aren’t about bringing the United States into local universities as much as they are about helping local universities build their own research communities. Google encourages participants to reapply for future funding, so we might host a second or third workshop. But wouldn’t it be great if our hosts in Peru and Ecuador began organizing their own workshops and reaching out to more universities in their areas? This, I think, is the ideal outcome of initiatives like Google’s — to level up the playing field all over the world.”