May Zhong on Competitive CS Programs

May Zhong's path to the CS major 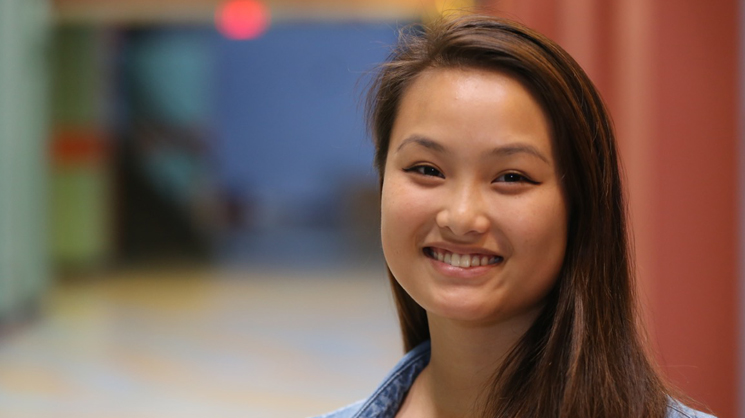 May Zhong, a rising computer science junior from Bellaire, Texas, chose Rice University over UC Berkeley because the local school felt friendlier. She said, “I visited both campuses and Berkeley just didn’t suit me.”

As the daughter of two doctors, Zhong had never shied away from academic competition and expected to pursue a medical career until her senior year in high school. She said, “I had always been drawn to math and logic-based thinking, then in AP Computer Science I realized Computer science was everything I ever wanted – the math, the logic, the good career prospects.”

That realization came after she’d already submitted all her college applications in the pre-med track. “I would have been a Biology major,” she said, “but after discovering CS, I never looked back.”

Her decision was solidified with her first CS course. She was surprised to find COMP 140 so exciting, even though the course was not easy and not what she originally expected. “It was even better,” she said. “It was so mentally fulfilling and the projects were so fun, I realized CS was definitely the right field for me.”

In her second semester, Zhong explored algorithms in COMP 182. “That opened my eyes to all the things you could do in CS, and it was so different from what I’d done in high school,” she said.

In spite of her affinity with the course material, she was pleased that the department did not encourage cutthroat competition. “The CS professors are all approachable,” she said, “and other students are also open to help, if you just ask. No one is NOT willing to help you, in order to do better than you in class. In fact, we’ll be talking to each other about what internships we’re applying for and how to help each other prepare for interviews.”

Part of the feeling of camaraderie in the CS department begins in the courses themselves. Zhong said, “As you go along, you find a group of friends that you work well with, and you progress through the courses with them.” Her immediate group of CS friends began in COMP 140. “We were assigned to teams of three, and we just clicked. We’re really good friends now,” she said. “As you go further along, you meet friends of friends, or happen to work with each other, or sit near each other in class, and you keep building that network.”

Zhong dove into activities in Baker College and performed at sports events with the Rice Owls Dance Team, becoming the team’s co-captain in her sophomore year. “I wasn’t that active in the CS clubs my first year,” she said, but that did not prevent her from accepting officer positions in both clubs as a sophomore.

A friend from high school encouraged her to join the women in computer science club, CSters (pronounced “C-stirs”). She said the male/female ratio in Rice CS is a lot higher than at other schools and she has plenty of opportunities, “but CSters is great – it’s a smaller, tight-knit group that’s much more intimate. And they make it possible for students to attend events like Grace Hopper.”

Zhong attended the Grace Hopper Celebration of Women in Computing (GHC) for the first time in 2015. She said, “it was pretty mind-blowing, there were so many people – I was not expecting that many women (and men, too) to be in CS careers.” She took the opportunity to visit with companies and listen to well-known people talk about what they were working on.

She is spending her summer interning at Microsoft, and said one of the surprises she discovered in the CS department is the number of well-known companies who recruit at Rice. “You don’t notice it, but many of the big name companies are hiring our students as interns and employees. People don’t realize that Rice students go to such great places. Nearly all of our students go into really amazing jobs. Everyone is on top of their game here, everyone motivates you, encourages you.”